When you book with an account, you will be able to track your payment status, track the confirmation and you can also rate the tour after you finished the tour.
Sign Up
Save To Wish List

When you book with an account, you will be able to track your payment status, track the confirmation and you can also rate the tour after you finished the tour.
Sign Up
2274

Why Book With Us?

How Do I Book?

Transport: This route is a 29 day trip covering 10 of South East Asia’s most popular destinations. You’ll spend 27 nights in your accommodation and travel mostly during the day, with one night bus.

Summary: This epic 4 week adventure hits all the most popular spots for backpackers in South-East Asia. Kick off your trip in Vietnam’s bustling capital, Hanoi, before working your way through Laos, Thailand and Cambodia before finishing back in Vietnam in Ho Chi Minh City. With everything from stunning beaches, beautiful landscapes and incredible cities, whatever it is you’re looking for this trip will deliver, giving you a once in a lifetime experience.

An incredible blend of  beaches, temples, and nightlife have made this route one of the most popular with backpackers in South-East Asia. Kick off your adventure with a few nights in Vietnam’s lively capital, Hanoi, before heading over to the idyllic Ha Long Bay. Another night in Hanoi will break up your journey from there to Laos, to the incredible and spiritual Vientiane. Next up is the rolling hills of northern Thailand, filled with some stunning scenery and impressive Buddhist temples. A few nights experiencing the nightlife in the vibrant Bangkok will break up your journey down to Cambodia. After a week experiencing the wonders of Siem Reap, Koh Rong Island and the capital Phnom Penh, it’s back into Vietnam for the final stop, Ho Chi Minh. The massive mixture of experience on offer will make this trip an unforgettable one, creating memories that will last you a lifetime!

Located by the banks of the Red River, Hanoi is an old city characterised by Chinese and French colonial influence. Unlike most big cities, the best way to get around here is on foot! Walk through the Old and French Quarter boulevards, visit Hoa Lo prison (now a museum but once a prison for US soldiers during the Vietnam War) and watch a typical Vietnamise cultural show at the Water Puppet theater! Don’t forget to bring your camera with you and take pictures of spots such as Train Street, an active train track with cafés on both sides. If you’re into local cuisine, make sure to taste Pho, Ca cuon and Banh goi. At the end of the day just relax sipping a couple of Beer Hoi (Fresh Beer) in Bia Hoi Junction or go crazy clubbing at The Bank Hanoi: the biggest nightclub of the city. Looking for family-friendly activities instead? Spend an evening at Vietnam Central Circus. Clowns, acrobats and animal performances are sure to keep you entertained!

Ha Long Bay is Vietnam’s most popular tourist destination and it’s not difficult to see why. With thousands of tall monoliths rising out of the turquoise sea, Ha Long looks like a set from Avatar and is guaranteed to take your breath away. You’re spoilt for choice when it comes to beaches, with Bai Chay and Minh Chau being amongst the best in the region. Take a boat trip to a nearby scuba diving spot or to one of the incredible caves covered with stalactites in Phong Nha-Ke Bang National Park. The floating village at Cua Van is like nothing you will have ever seen before. The best way to reach it is by kayak, passing locals in bamboo boats on your way. Just inland, the town of Ha Long boasts the world’s longest ariel tramway, offering a stunning view of the bay and the islands below. On an evening, Cat Ba island is where the party’s at, so head here to make the most of the local nightlife.

Just the one night stopover in Hanoi this time

Vientiane is the capital and largest city of Laos, located on the banks of the Mekong River near the border with Thailand. Here, you can’t miss a visit to Pha That Luang, a large gold-covered Buddhist stupa, famous for being the most sacred building in all of Laos. Tour Wat Si Muang temple and Patuxai, the memorial monument. This monument is also part of the wider Patuxai Park, a great place to wander and admire the sunset at golden hour. If you’re a nature lover, continue your trip exploring Buddha Park: you’ll find a 40 meter high Buddha sculpture, as well as other Hindu and Buddhist signs scattered amongst the gardens and trees. If you’re more into vibrant and crowded places, go to Talat Sao morning market where you’ll be overwhelmed by the variety of goods it has to offer! Try local dishes such as bla kan sung (grilled fish), bet yang (roasted duck) and sai oua (Laotian sausage) while walking through Vangthong Evening Food Market. Wondering where to have fun on a night out? Do a pub crawl along the riverside or spend an evening at the night market!

Located in rural Thailand, around 400 miles north of Bangkok, sits the stunning Chiang Mai. Nicknamed Thailand’s ‘rose of the north’, the city is the capital of Chiang Mai province. Its proximity to the Himalayas means the area is full of stunning hills, mountains and rainforests.  A must see here is Wat Phra That Doi Suthep, a stunning Buddhist temple at the top of the Doi Suthep mountain and a sacred place for many people across Thailand. The area surrounding Chiang Mai is also home to many unmissable spots such as the Bua Tong or sticky waterfall, so-named because you can climb it without slipping. Huay Tung Tao lake is also 20 minutes out of the city and is a great place to swim alongside the bamboo huts selling drinks and amazing local food. The nearby Elephant Nature Park is one of Thailand’s most respected ethical elephant sanctuaries and, at just a half hour drive from the city, it makes a perfect day trip.

Ranked among the world’s most visited cities and declared as the world’s best street food city, Bangkok is definitely a capital you must visit at least once in your life! Located in the Old City, you’ll find the Grand Palace , home to the famous reclining Buddha and a Thai massage school. Head across the river to reach Wat Arun, or the Temple of the Dawn, and get an incredible view, overlooking the city from the top. Visit the National Museum, focused on Thai culture, and admire some local art at Bangkok Art and Culture Center. To experience the local chaotic lifestyle, walk along the vibrant Khao San Road, famous for being a haven for backpackers and travelers. Keep going visiting the Floating markets and let yourself go at some local treats cooked then and there. Finish your tour by exploring the bustling Chinatown. If you’re looking for a more chilled place to relax, then Lumpini Park is what is perfect for you. Looking to enjoy the best nightlife in Bangkok? Go to Sukhumvit Road, which is home to most of the finest clubs and bars that the city has to offer. You can’t leave Thailand’s capital without tasting these delicious traditional dishes: Pad Thai, Tom Yum Goong, Gaeng Daeng and Khao Pad.

The capital of Siem Reap province in northern Cambodia is a spiritual home for many Cambodians and boasts the world’s largest religious monument, Angkor Wat. The stunning temple and surrounding grounds, littered with intricate stone carvings and giant statues, attracts over two and a half million visitors each year. The temple has become a symbol of Cambodia, earning itself a place on the national flag. The day pass to Angkor will also allow you access to nearby Ta Prohm, another incredible ancient city overgrown with trees, once the film set for Lara Croft’s Tomb Raider. Once you’ve experienced the incredible temples on offer, take a trip down to Tonle Sap. This enormous lake is lined with fishing villages made up of houses and restaurants on stilts. Back in Siem Reap itself, make the most of the city’s incredible Angkor night market which sells everything you can imagine. Next door is Siem Reap’s famous pub street, the best spot for a night out, with loads of open bars selling the notorious bucket cocktails.

When someone says the word ‘paradise’ the image that comes to mind looks a lot like Koh Rong.  With sandy white beaches, tropical palm trees and clear blue waters, Koh Rong has become one of South East Asia’s most popular spots for travellers. Spend the day relaxing on the shore, drink in hand, or head out snorkelling or scuba diving for an unforgettable experience. Koh Rong livens up at night, and Koh Toch Pier is the place to be. Cheap, beachside bars attract all backpackers in the area and the Sky Bar overlooking the forest and bay below makes the perfect place for a few drinks, especially at sunset.

Cambodia’s capital is Phnom Penh. Visit some of the city’s major landmarks such as the Independence Monument and the National Museum. Traditionally designed, these two monuments willl give you an exact representation of the Khmer (Cambodian) culture. Move to the massive Royal Palace, the official residence of the King (parts of it are closed to the public), and don’t miss a visit to the adjacent Silver Pagoda. Interestingly, the Pagoda is so named for its floor, which is covered with 5 tonnes of gleaming silver! If you’re looking for more culture, check out Phnom Penh’s most important wat and the home of many monks: Wat Ounalom. Founded in 1443, it remains the center of the Cambodian Buddhist religion. During daytime, learn about some traditional dances at The Cambodian Performing Arts Center or seek refuge from the midday sun wandering through The Central Market. In the meantime, have a taste of Fish amok and Twa ko. You won’t regret it! At the end of the day, enjoy some drinks and food in the Street 308 area, also known as Bassac Lane, where you can choose between several themed bars. Street 51 is also buzzing at night. If you’re a club lover, then this is the place for you! Pontoon, Phnom Penh’s biggest nightclub, is right here together with a few other pubs.

Vietnam’s second largest city offers something very different to Hanoi. Previously known as Saigon, Ho Chi Ming City takes its name from the former Prime Minister of Vietnam and played a central role in the Vietnam War. For any history buffs, the War Remnants Museum, filled with artefacts left over from the war and the Chu Chi Tunnels are both a must see. The city is separated into 24 different districts and the majority of the main attractions are found in district 1. This is where you’ll find the famous Notre Dame of Saigon Cathedral and also the biggest market in town, Binh Tay. Binh Tay’s prices are noticeably higher than other markets around the city, so we’d recommend the markets in district 3 for a more authentic experience. The nightlife in Ho Chi Minh is also something you must experience. With a surprisingly big craft beer scene and lively bars and clubs, there’s no shortage of good nights out to be found here. 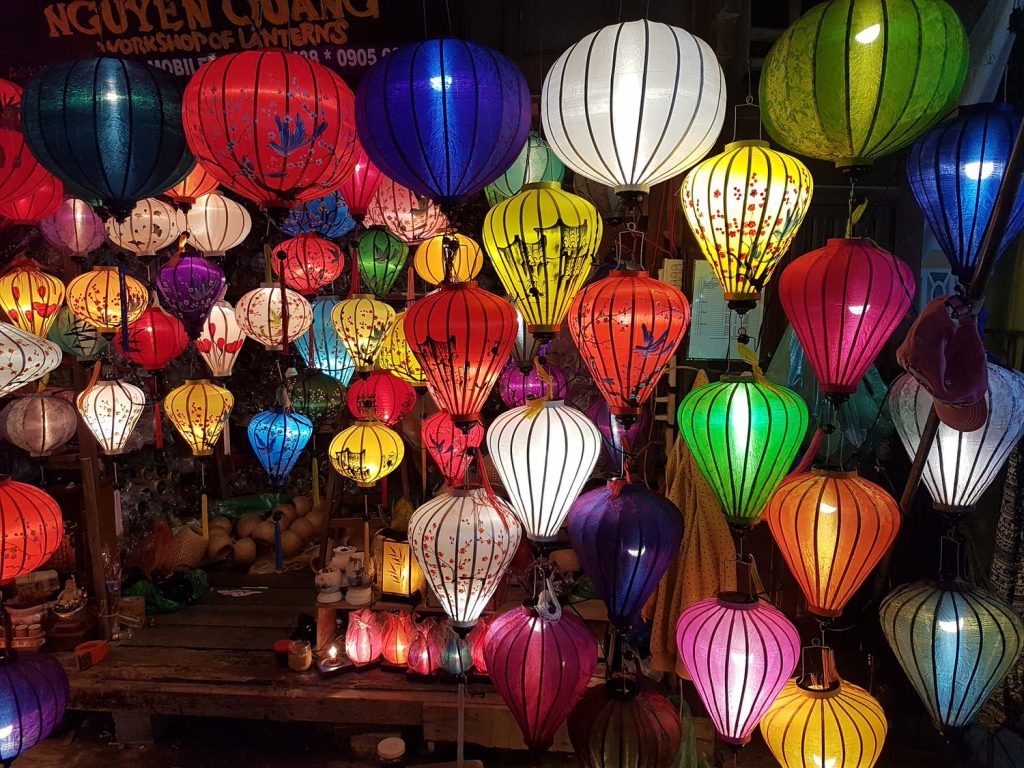 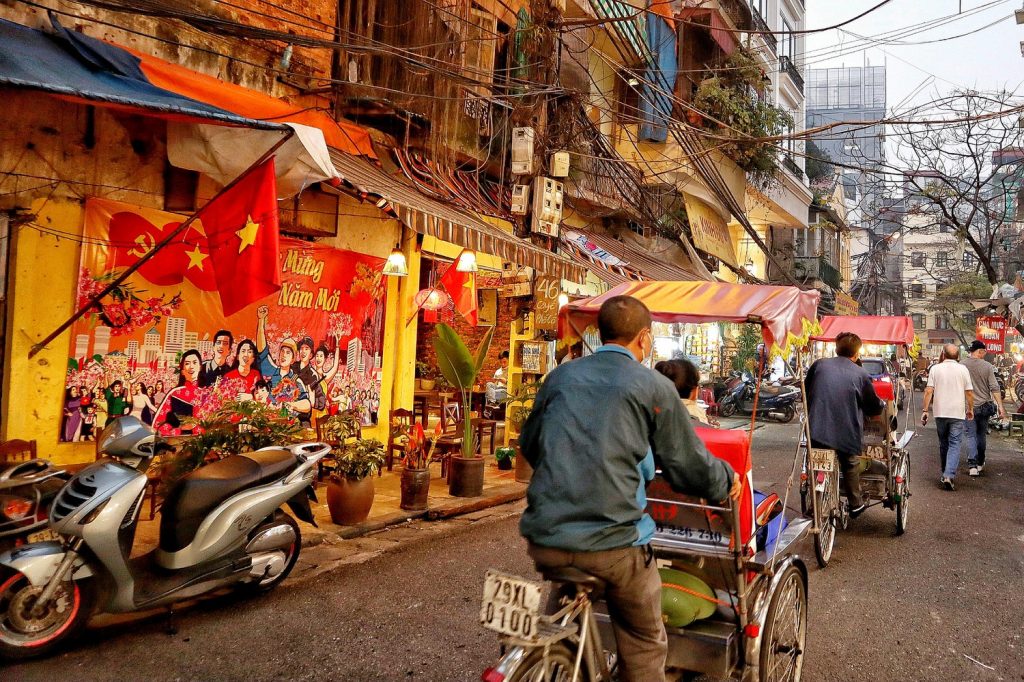